Are you confused about EN388? Here's what you need to know Home » News » Are you confused about EN388? Here's what you need to know

Click here to read the interactive version of the story

To help clear up confusion, David Langridge, Laboratory and Technical Manager at Polyco Heathline, talks about the complexities of EN388 and how to make sense of the new regulations.

In 2016 the EN388 standard for Personal Protective Equipment (PPE) was revised and came into force this April. These changes will have a noticeable impact, but the potential confusion that could result from the new cut resistance testing methods is of most concern. To counteract potential confusion amongst consumers, Polyco Healthline will display only the relevant scores on their products. Thus, gloves which undergo both ISO and coupe testing will display only the ISO testing scores. We believe that showing both scores adds little or no value, and only complicates the matter of determining suitability for the task in mind.

As one of the leading providers of protective gloves within the UK, Polyco Healthline has a unique insight into the effects that this regulatory change will have. As such, this article has been produced to help clarify some of the confusion which surrounds the changes, its impact, and the effects that can be expected within the industry. 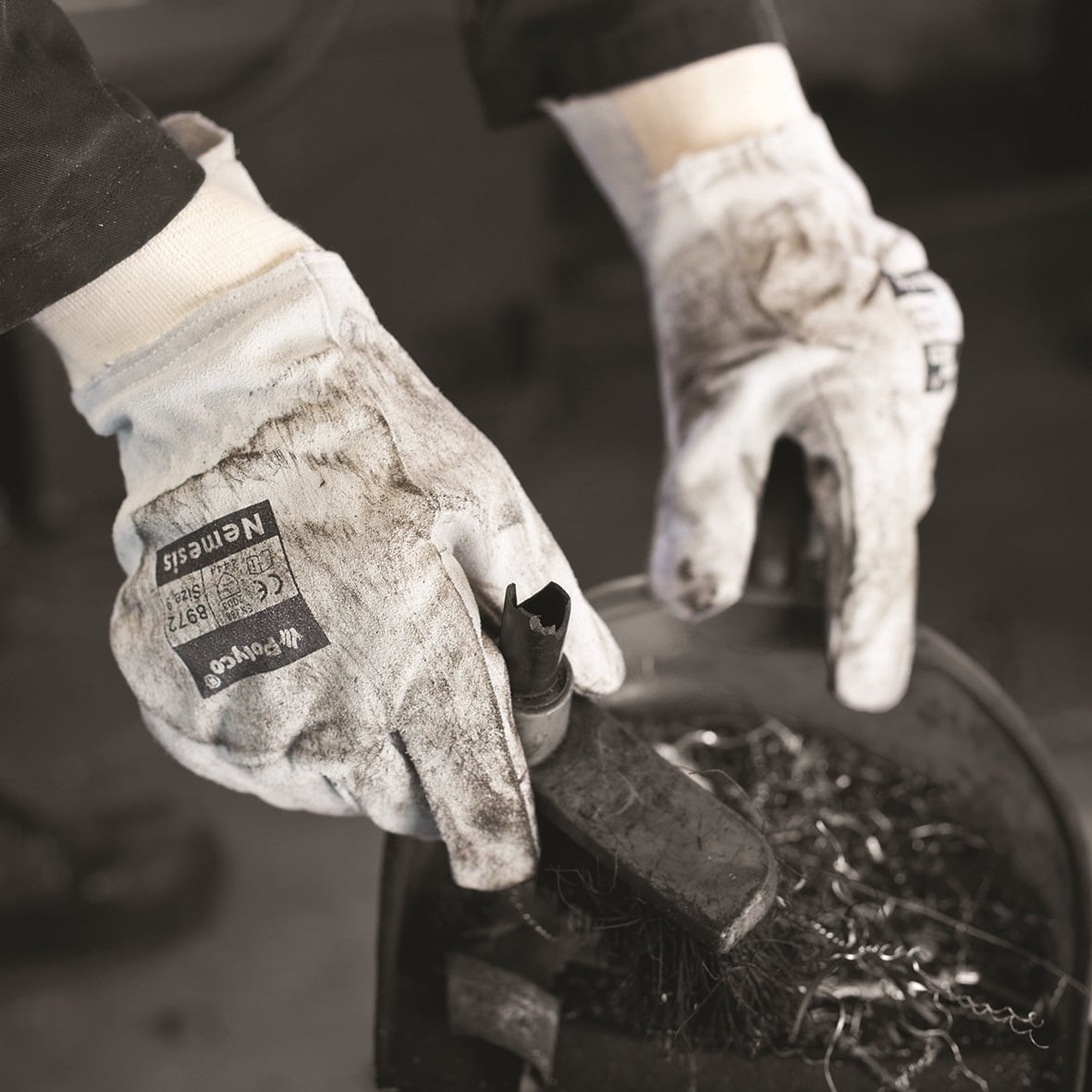 1. Abradant Damage:
Regulatory requirements set in 2003 specified the use of finished paper with a specific weight, breaking strength, backing, and abrasive size to test abrasion resistance in PPE. Since the regulatory changes in 2016, it is required that Grit 180 Klingspor PL31B abradant paper be used.

2. Cut Damage:
Since the implementation of EN388:2016 the methods for testing cut resistance have been updated. It has been common practice to use the coupe method to classify the cut resistance of protective hand wear, but since this regulatory update, the ISO method (ISO13997:1999) will also be used in cases where the coupe testing causes blunting of the test blade. The blade will be checked for blunting at 60 cycles.

3. Impact Damage:
As a direct result of the EN388:2016 regulation changes impact resistance has also been added to PPE classification (on an optional basis, at the moment). Gloves seeking to bear the ‘P' mark which denotes impact resistance must withstand a trained force of 7 to 9-kilo newtons applied with an impact energy of no less than 5 Joules. 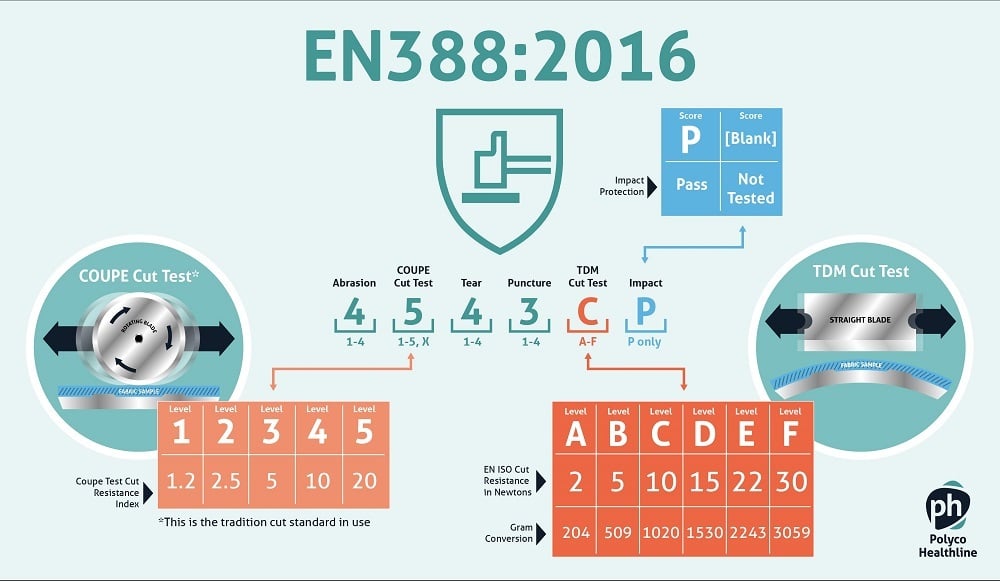 What Does This Really Mean?

All these changes will have a noticeable impact.

The specified changes to the abrasion test may have an impact on abrasion resistance scores; Polyco Healthline has found scores typically come down one level in cases where they were previously borderline passes. However, gloves which met the previous standards comfortably are unlikely to be affected. As such, the main impact will be on PPE which was only just passing its previous abrasion level.

Impact resistance is optional so it will have no unavoidable effect other than to change classification pictograms (which will already be needed due to changes in the cut resistance test methods).

The main area of contention is the change made to the categorisation of cut resistance levels and the methodology used to measure this feature. As a result of the EN388 test results, including cut resistance can now be shown in 3 different ways: 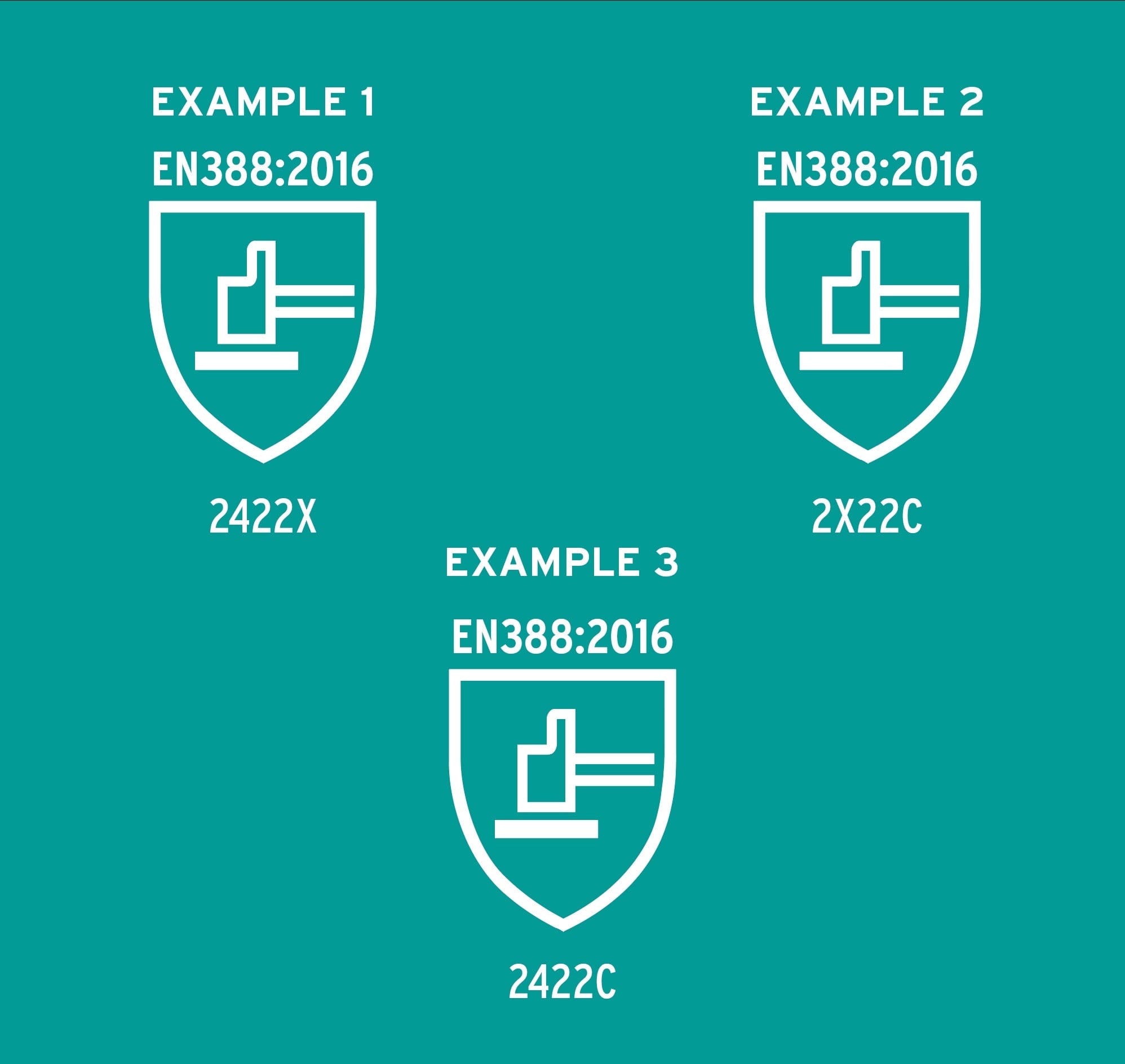 Each of the scores above could represent the same glove, and it is this fact which is likely to cause the most confusion. The above pictograms could all relate to the same glove. The differences denote the different testing methods, not varying levels of quality or performance. 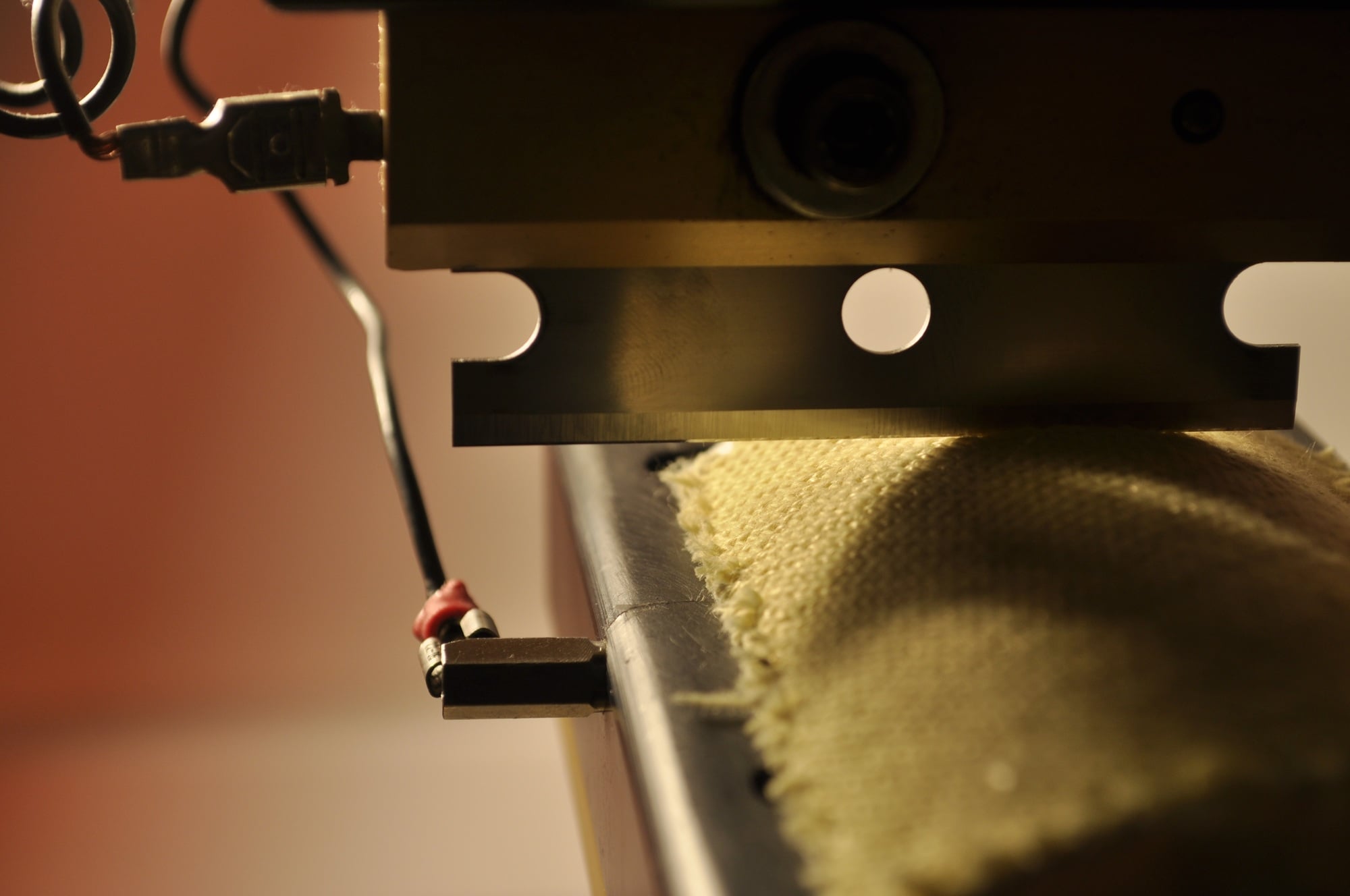 How Has Cut Resistance Testing Changed?

The new EN388:2016 regulations make allowances for the blunting of the blade used during the existing coupe test and state that after 60 cycles the blade in use must be checked for blunting.

Should the blade have become blunt, the ISO cut test is to be used to ensure resistance is accurately measured. Thus, cut resistance is being more stringently tested to ensure higher levels of safety and protection.

In practice, Polyco Healthline has found that level 4 or 5 gloves will cause the blunting of the test blade within the allowed 60 cycles and so these gloves will most often be subjected to both the coupe and ISO cut resistance tests. Furthermore, high cut resistant gloves which are capable of blunting the blade will now give lower scores than they have previously. This is because resistance is calculated as an index and accounts for the number of cycles for which the test can be run.

Does This Give A True Indication Of Cut Resistance?

While the new regulations were implemented to ensure greater stringency in resistance testing for PPE, there are some concerns. The ISO test is particularly vulnerable to result manipulation due to variations in the blades, calibration materials, and the way in which results are calculated, as such there is the chance that test results can be manipulated to benefit producers.

The set standards do not define which type of graph should be used to accurately assess results, and so there can be huge differences between manufacturers interpretation of the results. An example graph is shown below: 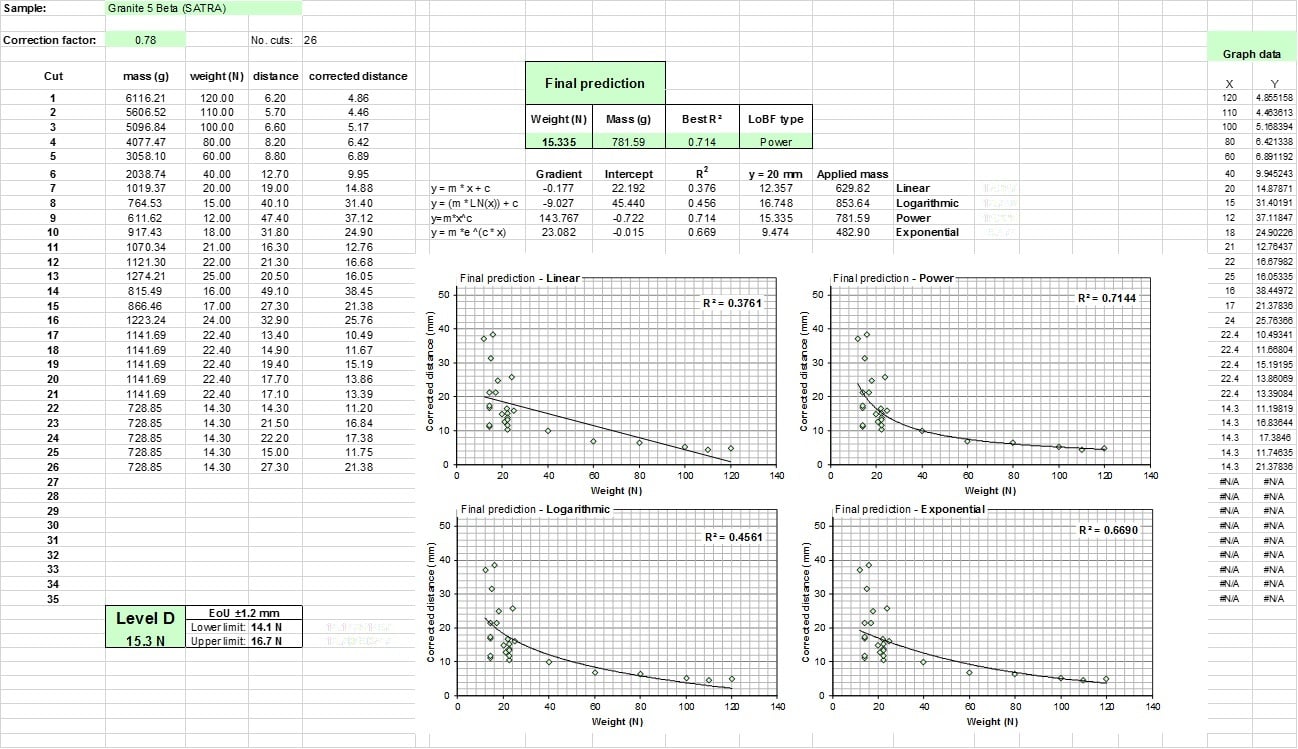 In this example, the same results were taken and analysed by two independent laboratories. Due to the differences in the graph of best fit used, one laboratory gave the glove a level B for cut resistance, while the other gave it a level D. This is considerable difference, and it was caused by the simple fact that one facility always uses the exponential graph, while the other calculates the r2 value by using a series of graphs before selecting the line of best fit. As such, results can be legitimately manipulated for best effect.

The number one safety risk factor for hand injuries is not wearing gloves because they are uncomfortable. Therefore it is imperative that cut resistance gloves provide consistent and reliable cut protection, comfortable and do not get in the way of work. To accomplish this, you need to be aware of the materials used in your cut resistance gloves, even if it passes a cut protection standard. 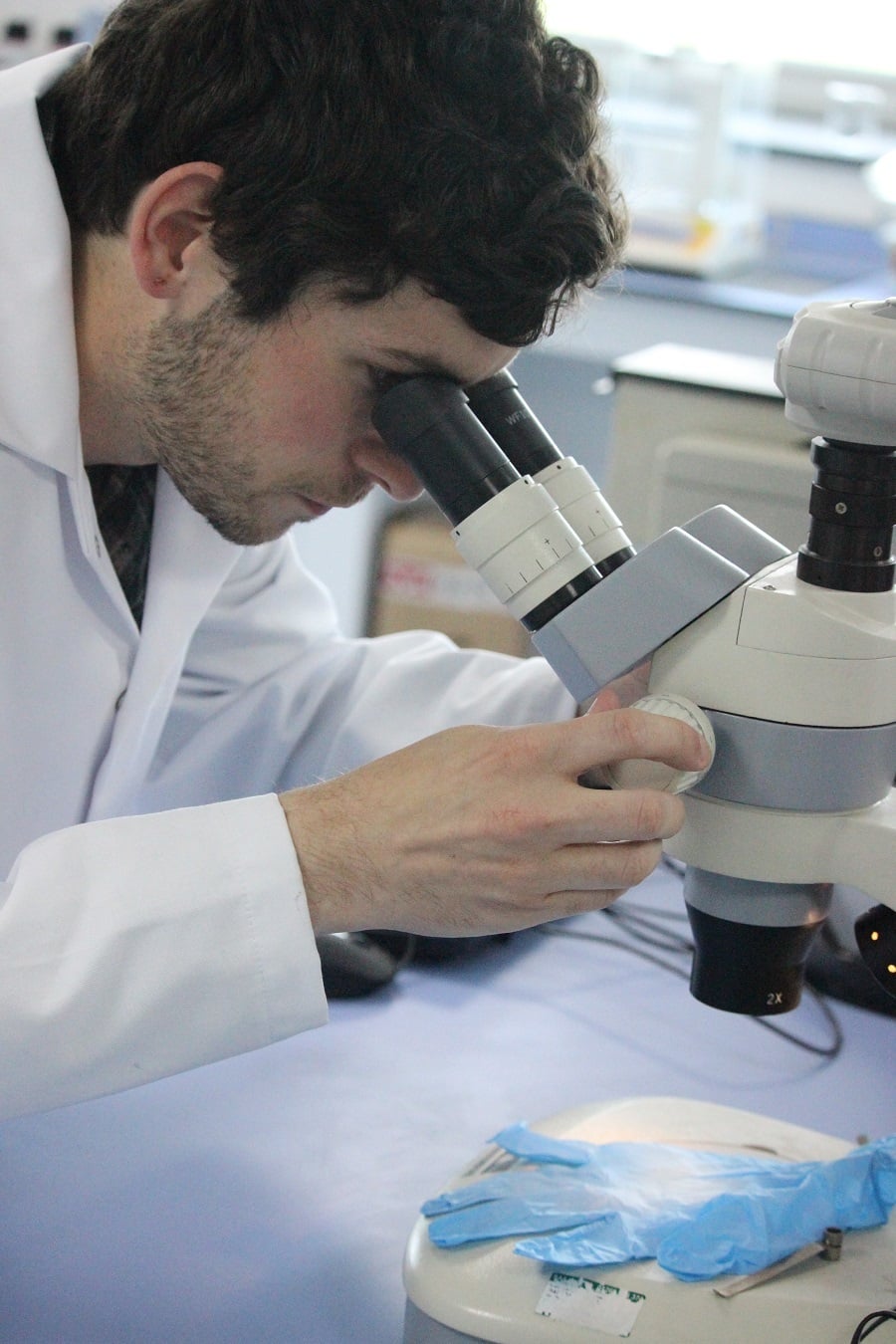 - The new EN388: 2016 regulations have made changes to the abrasion and cut tests.
- Impact resistance tests have been introduced.
- Cut resistance will now be measured by either the coupe test, the ISO test, or by both in the event of blade blunting.
- If both cut resistance methods are used, the ISO classification is to be the official classification.

Polyco Healthline will be marking their gloves with only the relevant results in line with EN388:2016 to avoid causing further confusion amongst consumers. Polyco believes that the use of both scores adds little, if any value, to the end user as they attempt to determine the suitability of a product.